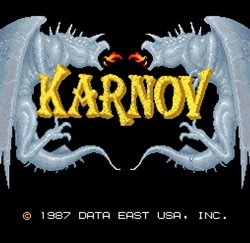 iiRcade Inc., the ultimate connected arcade machine that allows gamers of all ages to play their favorite retro and modern games in arcade style at home, is pleased to announce the addition of 5 popular Data East titles that are officially licensed by Paon DP Inc., the Japanese based video game development company, are coming to the iiRcade Platform.

Karnov, is a strongman platformer that was released in the arcades in 1987 and later on the Nintendo Entertainment System (NES). In the game, Karnov must defeat several horrendous monsters in order to collect treasure. As a character created by Data East, Karnov was reintroduced in several other games from the company, including Bad Dudes Vs. DragonNinja as a level boss.

“We’re very excited to add a number of great games of Data East, ” said Jong Shin, founder & CEO of iiRcade. “There’s a lot of fun actions in these games, both classic vertical and sidescrolling arcade style.”

Vapor Trail: Hyper Offense Formation, known in Japan as Kuhga and Rohga: Armor Force, released in Japan as Wolf Fang: Kuhga 2001 are a series of arcade shoot 'em ups while Skull Fang is a 1996 vertical-scrolling shooter.

Another scrolling shooter added to the iiRcade library, Atomic Runner Chelnov, was first released in the arcades in 1988 before debuting on Sega Genesis home consoles in 1992.

Beyond the original design, iiRcade is available in two premium versions: Dragon’s Lair Edition with Dragon’s Lair cabinet graphics and Black Edition that enables users to design their own cabinet graphics and comes with officially licensed Double Dragon stickers that can be put onto the cabinet as a free gift. Both premium versions include upgraded 128-GB storage memory and original Sanwa joysticks.